Be Reactive my friend

In a world where data comes from everywhere being reactive when coding your apps could make a huge difference in the user experience. Even though Reactive is becoming more popular across the community the benefits are not clear enough. Entities can trigger events from many places around the app. It can be either from an user action, an application lifecycle or a push notification. These triggers turn into some state changes that our app has to reflect somehow. Some examples could be:

When our code is imperative, we notify the interested entities manually. How many of you have written pieces of code like these in your apps:

Entities change the state in our sources of truth from many points (e.g. tracks in a database or current track in the player). Think about a player that is playing tracks in background. The player controls are floating in the UI and the user opens a track from a new view controller. What if the developer forgets about updating the controls? Or think about a predictive data sync. For example, we sync the notifications when a push notification is received. How would you update the collection view if you don't know about the notifications view controller from the AppDelegate? (and no... appealing to singletons or inspection is not a good solution).

There’s a clear need to be reactive, react to the things that are happening in your app, no matter who’s triggering them and from where. Being reactive doesn’t mean add one of these reactive libraries in your project as a pod and use it. But design your application to be Reactive. These libraries will help you making things easier and nicer.

Being reactive is about designing your app to react to changes. It requires some effort to set your mindset away from the imperative world.

I’ll guide you in this post through some common scenarios and explain how to separate the action triggering from the reaction. 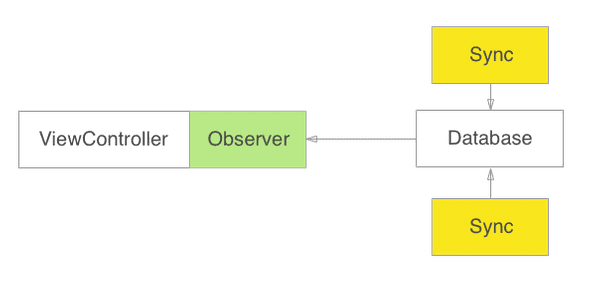 Databases are sources of truth in our apps. They save the data, in most of cases coming from an external API. Since apps want to offer the best user experience, they get sync with the API as the user navigates through the app. viewDidLoad() is the common place where most of developers trigger the data sync. However, there are more places where the data can be sync. Those apps that sync the data predictively do it from places such as background operations or push notifications.

In these cases it’s important that any entity in the app interested in that data, gets notified when these syncs take place.

When the StreamViewController is loaded we ask for data synchronization. This event doesn't report anything but it could return an error if we're interested in presenting an alert in that case. When the data is updated in the database we'll be observing it and updating the collection view presenting that new data that has been inserted. 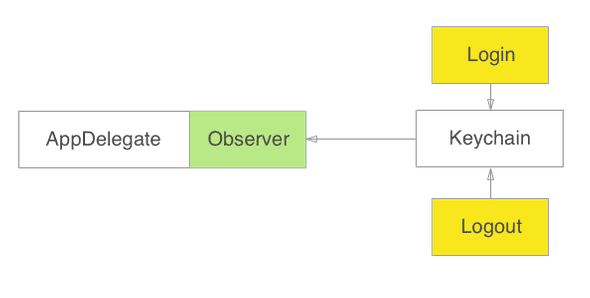 If we support authentication in our apps we might be saving user's credentials in Keychain. Login is done from the login view and the logout most likely from an account/settings view. When login/logout take place in the app there are some entities that might be interested about session changes in the Keychain, for example, your app navigation and your http client:

We subscribe in the AppDelegate to session changes. Since we're only interested in the transition between states, we use the operator distinctUntilChanged. When there's a new .Next(Session?) event sent we update the root view controller according to that.

There's some data that is not persisted in databases for example the user profile or local configuration that is not sync in the API and that is cleaned up once the user removes the app.

If we support authentication in our apps we might be saving user’s credentials in Keychain. User signs in from the login view and the logout most likely from an account/settings view. When login/logout take place in the app there are some entities that might be interested about session changes in the Keychain. For example, your app navigation and your http client:

I did an implementation that is available on this gist. It defines an UserDefaultsObservable that allows you to subscribe to. To keep the subscription alive you must keep a reference to the observable.

Our apps are full of these scenarios where triggers and observations are completely separated. In that sense reacting to these triggers would prevent us from imperatively looking for the entities that might be interested in these events. We also decouple synchronization from fetching so if we wanted to replace any of those elements, you could easily do it without affecting the other. Moreover, don't think that being reactive is about using reactive concepts and libraries out of there. You can be reactive as well by subscribing to the NSNotificationCenter or using a NSFetchedResultsController. Libraries such as RxSwift and ReactiveCocoa provide a typed, more stream based solution, with some operators that allows you combining these events before they reach the subscribers.

Previous: Stepping off the social world
Next: Micro Features Architecture for iOS