States - The source of truth

I have been these days thinking about how we do manage states in our iOS apps. States are a source of information but also the source of bugs, why? Because we spread states across multiple components, duplicate them, and we forget about considering derived states. Our app shows off unexpected behaviors, and we struggle to find the reason. The user credentials are persisted in the Keychain, so we know whether the user is logged in or not, but our ApiClient also contains that information. Which one should I trust? Are you sure both are synchronizing when any of them changes? I’m sure you miss some. States are a common source of bugs in our apps. There are no silver bullets to solve this problem but multiple approaches out there, programming paradigms, patterns and tricks that can help you with the state simplification.

An attempt to centralize state

Have you ever wondered why we use singletons for some components in our apps? There are performance reasons, it also provides an instance that can be accessed from any point of your app, and in regard states, it has a reference to a state. The famous ApiClient.sharedIntance() that has information about the access token is a great example. Singletons are great to keep states, as we can access them from anywhere. Nonetheless, we tend to modify its state imperatively without considering that all the consumers of the singleton instance might get into an inconsistent state since they are not subscribed to state changes of the singleton instance. 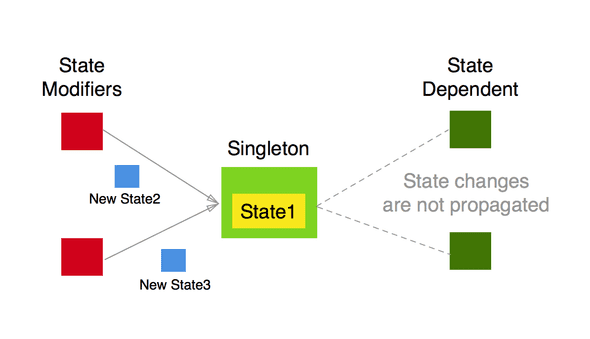 If you haven’t seen it yet, I recommend you to watch this two talks:

I heard about Flux a few days ago when I watch the talk Realm published on their website. Flux is an architecture originally proposed by Facebook that aims unidirectional data flows in apps to build user interfaces. What’s the core idea of Flux? 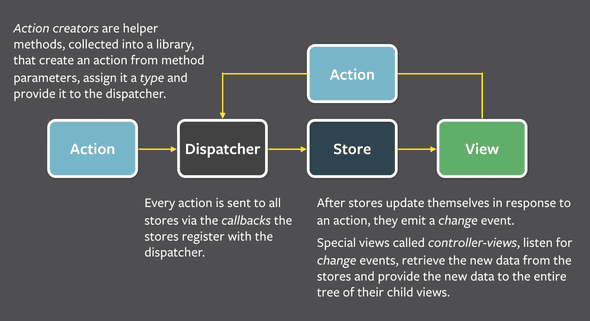 There are some frameworks that implement the core concepts of Flux for Swift, the most popular one is ReduxKit that also offers reactive wrappers. 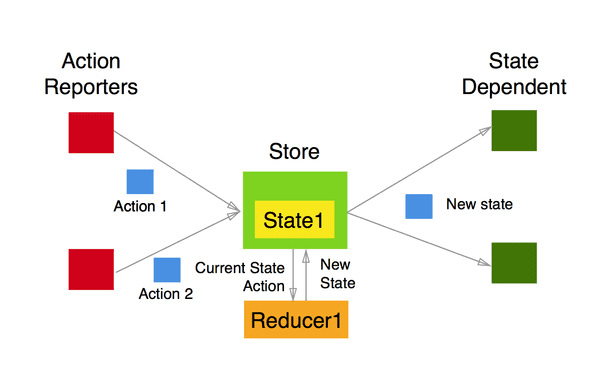 In this playground with states moving around, paradigms like Reactive Programming contribute creating harmony. The core idea of Reactive Programming is that information flows through streams from data sources. Streams events can be combined, and manipulated but side effects can never be introduced in the equation. How does it relate to states propagation? Sources of truth, where states are located are the source of these streams. Every time the state changes, the source sends the change through the stream. Interested entities can subscribe to these streams, deciding what to do when the state changes.

How do we move from the imperative world to a reactive one?

Some frameworks provide components that are based on notifications when state changes take place:

These components could be easily wrapped into Observables, or Signals/SignalProducers if you want to work with Reactive concepts. Once wrapped, you can map, filter, combine, observe on a given scheduler, … The magic of Reactive.

There are some scenarios where it’s impossible to have a single source of truth because of performance reasons. Accessing data sources like databases or APIs is expensive in term of resources consumption. We cannot execute a request to an API for every row in a TableView, or a execute a query against a database every time we render a cell. Those are typical examples where we are forced to duplicate our source of truth and have a cached version that can be quickly accessed (typically in memory).

Whenever you think about cache the source of truth ask yourself the following question:

Is it expensive accessing NSUserDefaults? And Keychain? If it isn’t why do we create cached copies and add complexity making sure states are synchronized? Can’t the ApiClient have an accessor to Keychain instead of the copied token that is restored when the app is opened?

We are forced to cache states in our apps to offer a good experience to our users. Two common scenarios where we cache states are when we’re persisting data from an API in our database since we want the state to be quickly accessed and when we cache a database query results in memory to be presented in a collection view.

The reason for persisting the API state in our local database or storage is to make navigation in the app faster. If we download the user repositories on GitHub and persist them in our database, when the user goes into the repositories view we don’t have to show a hilarious spinner while we are downloading the data. The schema of states would be the following one:

As I mentioned earlier, due to performance reasons, when the data from a database is accessed we create a cached version in memory that we access to. It means we add a new state to the game, having then the API state, the database state, and our copy in memory of the database state. Three states that has to be synchronized! The schema looks like this one:

The complexity increases since we need to synchronize two states, the API with the database, and the database with the memory. Plus, the view has to react to the memory copy changes. Since the state is automatically propagated from the presentation layer we have to subscribe to these states and update the view accordingly and trigger the synchronization action.

I hope you liked the article, the best solution for your app depends on your app itself, its data model, its persistence solution, … Find what’s the architecture that best adapt to your problem and try to keep the principles mentioned above in mind and simplify states!