Swift and Objective-C playing together

Since Swift was released, a lot of developers have been wondering about the Swift integration in their projects. If we take a look to the Apple documentation it seems that the integration is possible, the language was designed for having that kind of copmatibility instead. However the majority of them haven't taken the decission of start using it, sometimes for fear of breaking something on the current code base, or probably for not having enough time to learn it.

After the release I started working on SugarRecord an open source library that is a kind of wrapper to work with databases (CoreData and Realm). The reason basically was that I wanted to learn deeply the language and playing with Playgrounds and short examples wasn't going to help a lot. You end up forgetting those small examples, and not facing with the real problems you would face if you played with a big project/library.

The experience has been amazing because I've learnt how powerful Swift might be if we compare it with Objectve-C but a bit painful after having to deal with different updates on the language, some unstable versions of XCode (unstable already) and overall what things that language has in common with Objective-C and how we can have a communication layer between them.

It's possible to have Swift playing with Objective-C in the same project, however there are some points that it's important to keep in mind if you want to avoid a big headache. I would try to summarize most of them here with short examples that explain them. 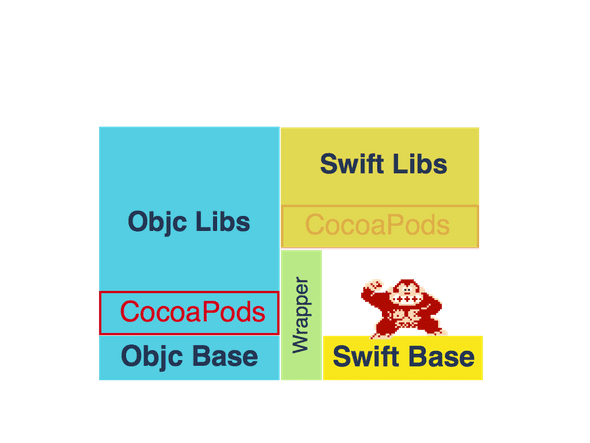 If we analyzed the structure of our Objective-C projects that would be something like what you can see in the figure above. We have some libraries integrated (or not) using an external dependency manager like CocoaPods into our Objective-C code base. Everything works great, we have both in the same language and the same language features are available in both sides. What happens when Swift appears in the scene? We have features that are available in a language (Swift) that aren't in the other and that introduces extra communication problems that we have to face. We'll see that we can use a kind of keywords or Swift types that are automatically translated into the equivalent ones in Objectve-C but that in some other cases we might end up using a wrapper component that allows us to stablish the communication with these Swift components.

Firstly we have to be sure of which features are "pure" Swift features. What does pure suppose? Features that can only be used from Swift and Objective-C won't be able to work with them. Yes, those features make the language much better, and powerful and allows you to simplify much more your implementations but if what you actually want is to have something compatible with your Objective-C it's better to wait until you have more Swift than Objective-C to start enjoying them. Those features are:

If you don't know about any of those features I recommend you to take a look to the docummentation where you'll learn more about them.

Remember, Objective-C doesn't know about them and you must avoid them in the public interface of your Swift features/components. Otherwise you won't be able to use them from your Objective-C code

As I mentioned not all your Swift code is exposed. The point is that the compiler follows some rules to generate the header and not all of those rules are reflected on the Apple docummentation. You'll figure out some of them working on that type of integrations. Some others you'll learn them reading from other developers dealing with similar problems. Summarizing the most important ones, it will only be exposed:

When you import Objective-C generated classes into your Objective-C existing classes do it using a foward declaration @class. Otherwise you might have troubles with circular dependencies. Import only the header file in the body of your classes.

XCode uses your product package name for the xxxxx-Swift.h file naming but replacing some non alpha-numeric characters by an underscore symbol. To avoid some problems rename your package name using an alpha-numeric name (that doesn't start by a number which is replaced too by underscore).

What can I do once defined the bridge?

You can subclass Objective-C classes in Swift, remember to use the override keyword wherever you are overriding a parent class implementation. Swift classes cannot be subclassed in Objective-C (even if they are NSObject sublcass or labeled with the keyword @objc)

AnyObject is the Swift equivalent of ids. However AnyObject in comparison with id is not a class type but a protocol. AnyObject is not known until runtime execution. It supposes that the compiler can pass if you call a method on the AnyObject object that it doesn't actually implement but if your program executes that line of code your app is going to crash. Be careful!:

As you probably know Swift introduced a new type of data, optionals those allow nil type and the real content of the type (in case of having) is wrapped inside that optional. Objective-C is more flexible in that aspect and allows you to call methods on those nil objects without causing exceptions or making your app crash. The way the compiler translates those variables or function return parameters that might be nil is using implicitly unwrapped optionals (var!). It implies that if you are planning to use one of those implicitly unwrapped optionals that the compiler generated from your Objective-C code do it carefully checking firstly if the value is nil. Otherwise, trying to access it being nil will cause a runtime error and your app will crash

Extensions are the equivalent of categories in Swift. The main difference is that we can use extensions in Swift to make classes conform protocols that they originally didn't. For example we can make our class MyClass conform the protocol StringLiteralCovertible and initialize it using an string:

I recommend you that interesting post of Matt http://nshipster.com/swift-default-protocol-implementations/ where he explains different uses of default system protocols to do something like what I have shown you above.

They are automatically converted too by the compiler. There's only a difference and it's that in Swift if you use an external variable in a closure it's automatically mutable (no copy of the bar). Do you remember when you had to do it in Objective-C using the keyword __block before the variable definition? No more required!

And yes! we have the FuckingBlockSyntax.com equivalent for Closures, FuckingClosureSyntax.com

In protocols there are such exceptions crossing the protocols usage between Objective-C and Swift. While Swift can adopt any Objective-C protocol, Objective-C can only adopt Swift protocols if they are of type NSObjectProtocol. Otherwise Swift won't be able to do it.

Moreover if you are using protocols in a Delegate pattern you have to declare your protocols as class. Why? Because not only classes in Swift can conform protocols but structs too. Strucs are passed by copy instead of by reference and we don't want have a copied object that conforms a protocol behaving as a delegate of something because it's not actually the real delegate object. When you set a protocol as class, only classes can conform that protocol

Most of the foundation data types can be used interchangeably with Swift types (remember to import Foundation). So for example you can initialize a NSSTring object in Swift using a Swift string:

Int, UInt, Float, Double and Bool have its equivalent in Objective-C that is NSNumber

Regarding the collection types, we have equivalents too there. [AnyObject] Swift array is automatically converted into NSArray (if the elements are AnyObject compatible). For example if we have an array of Int, [Int] it will be converted into an array of NSNumbers.

Any NSArray will be converted into a Swift [AnyObject] array. We can even downcast it into the real type:

You might wonder if we can use CocoaPods with our projects where we've started using Swift. The answer is YES, you can so far, but only using Objective-C pods. You can add the headers into your project Bridging-Header.h file and then they will be visible in Swift.

Finally as a conclussion of this summary/helping post I would like to give you some advices for your Swift integrations. I figured out some of them when I had to deal with some problems and I would like you not to have to deal with the same problems.

Previous: Boosting your mobile app with Javascript and some mobile knowledge
Next: Codemotion experience